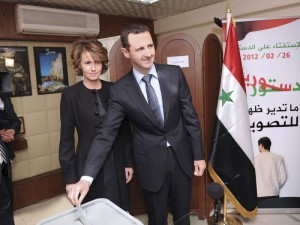 Syria's President Bashar al-Assad and his wife Asma vote during a referendum on a new constitution at a polling station in a Syrian TV station building in Damascus February 26, 2012, in this handout photograph released by Syria's national news agency SANA. REUTERS/SANA (SYRIA CONFLICT — Tags: ELECTIONS POLITICS) THIS IMAGE HAS BEEN SUPPLIED BY A THIRD PARTY. IT IS DISTRIBUTED, EXACTLY AS RECEIVED BY REUTERS, AS A SERVICE TO CLIENTS. FOR EDITORIAL USE ONLY. NOT FOR SALE FOR MARKETING OR ADVERTISING CAMPAIGNS