A Somali refugee carries his son as he h 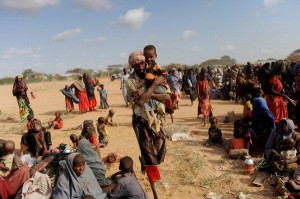 A Somali refugee carries his son as he hurries to join a new line outside a registration and food distribution point in the Dadaab refugee camp in northeastern Kenya on July 5, 2011. Dadaab, a complex of three settlements, is the world's largest refugee camp. Built to house 90,000 people and home to more than four times that number, it was already well over its maximum capacity before an influx of 30,000 refugees in June. Upon arrival, the refugees find themselves tackling a chaotic system that sees new arrivals go days, even weeks, without food aid. «It still takes too much time for refugees to get proper assistance,» Antoine Froidevaux, Medecins Sans Frontieres's (Doctors Without Borders) field coordinator in Dadaab told AFP. «The answer in terms of humanitarian aid is not satisfactory at all at the moment.» AFP PHOTO/Roberto SCHMIDT (Photo credit should read ROBERTO SCHMIDT/AFP/Getty Images)