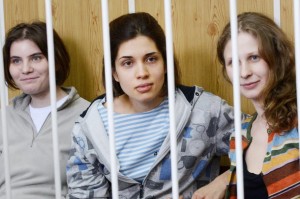 Members of the all-girl punk band «Pussy Riot» Nadezhda Tolokonnikova ©, Maria Alyokhina ® and Yekaterina Samutsevich (L), sit behind bars during a court hearing in Moscow on July 20, 2012. Three members of the all-woman punk band «Pussy Riot» were detained, on charche of hooliganism for barging into a Moscow church and singing a «punk prayer» calling for the ouster of President Vladimir Putin on February 21, 2012". The trio, who face up to seven years in jail, have been held in pre-trial detention since March after the incident in February, and their harsh treatment has become a new rallying cause for the anti-Putin opposition. AFP PHOTO / NATALIA KOLESNIKOVA (Photo credit should read NATALIA KOLESNIKOVA/AFP/GettyImages)