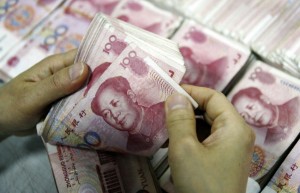 A Chinese bank worker counting stacks of 100 yuan (14.75 USD) notes at a bank in Huaibei, in eastern China's Anhui province. The yuan's daily trading band is «appropriate» for the time being but could be widened in the future, a vice-governor of China's central bank said in an interview published on August 2, 2010. STR/AFP/Getty Images