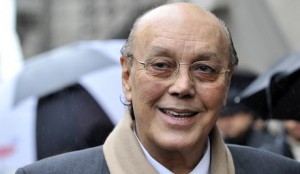 epa03366132 (FILE) A file photo dated 19 January 2012 shows former business tycoon Asil Nadir arriving at the Old Bailey court in central London, Britain. Asil Nadir, who was accused of false accounting in connection with the collapse in 1990 of his British business empire, was on 20 August 2012 found guilty on three counts of theft. Nadir, a Turkish-Cypriot, returned to Britain in August 2010, to face trial after evading justice by fleeing to Northern Cyprus in 1993. He denied the charges on 13 counts of theft related to the collapse of Polly Peck International. An Old Bailey jury cleared Nadir of one other count but is still deliberating on a further nine counts. The charges allege theft of 34 million pounds (53 million US dollars) from Polly Peck, British textile firm, between 1987 and 1990. EPA/ANDY RAIN