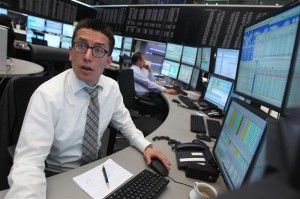 A trader reacts at his desk in front of the DAX board at the Frankfurt stock exchange May 7, 2012. Euro zone blue chips turned positive by mid-session on Monday, bouncing back from oversold territory after a knee-jerk reaction to French and German elections results sent the market to 4-½ month lows in early trade.The index had opened sharply lower after elections in Greece and France, which reflected public anger over austerity measures and cast doubt on the euro zone's ability to resolve its debt crisis. REUTERS/Alex Domanski