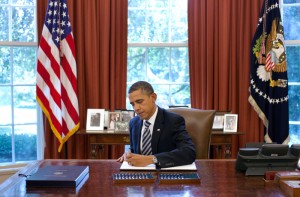 Aug. 02, 2011 — Washington, District of Columbia, U.S. — In the Oval Office, President BARACK OBAMA signs into law the bi-partisan bill that raises the debt ceiling and avoids a government default that analysts as well as the White House warned could have had catastrophic effects on the American economy. The Senate voted 74-26 to send the bill to the president's desk.(Credit Image: © z03/ZUMAPRESS.com/Global Look Press)