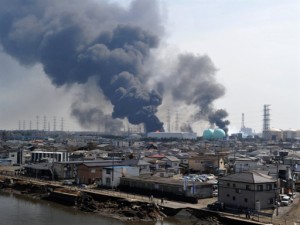 Smoke billows from fires raging at the port in Tagajo, Miyagi prefecture on March 13, 2011 following a massive earthquake and tsunami on March 11. Japan battled a feared meltdown of two reactors at a quake-hit nuclear plant, as the full horror of the disaster emerged on the ravaged northeast coast where more than 10,000 were feared dead. An explosion at the ageing Fukushima No. 1 atomic plant blew apart the building housing one of its reactors on March 12, a day after the biggest quake ever recorded in Japan unleashed a monster 10-metre (33-foot) tsunami. AFP PHOTO / KIM JAE-HWAN